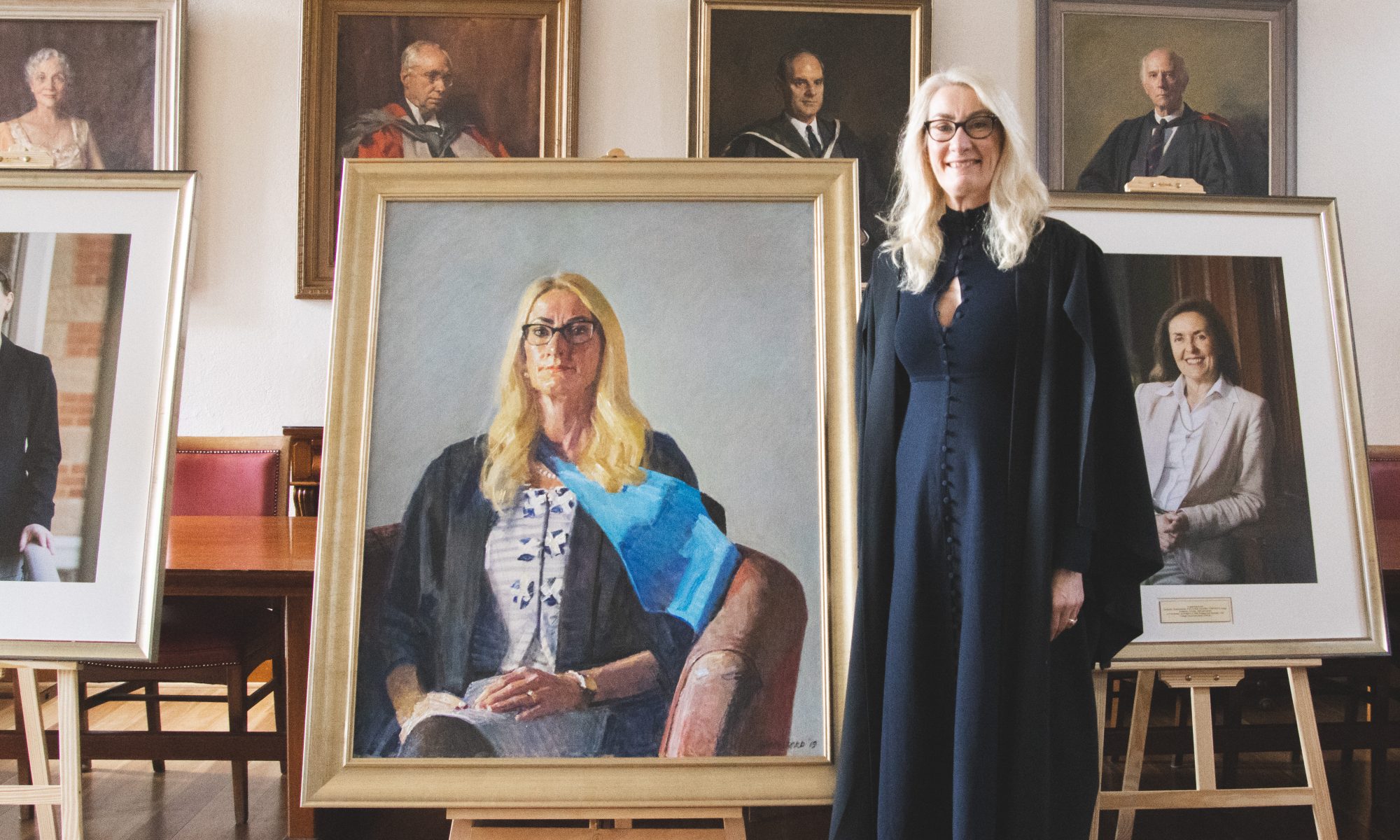 A striking and powerful portrait of the eighth Master of the College, Ms Rose Alwyn, painted by the eminent portrait artist Robert Hannaford AM, was unveiled on Founders’ Day, and is now hanging prominently in the College dining hall.

Over 150 members and friends of the College were present for the unveiling of Rose Alwyn’s portrait and other Founders’ Day events on Sunday 2 May. These began with a service to honour St Mark, the Founders, and members of the College killed in World War II. At morning tea on the College Green, the traditional toast to the Founders was followed by a toast to thank Ian and Pamela Wall for their great generosity to the College (most recently funding the car park extension) and to mark Ian’s 90th Birthday. Also unveiled on the day were photographic portraits of four other St Mark’s women of influence – the late Georgia Blain, Dr Rachel Buxton, Dr Angela Evans AM, and Ms Linda Matthews.

Speaking after the unveiling of her portrait, Rose Alwyn spoke of the “very personal, intense but exciting experience” of being painted, and thanked the College Board for commissioning Robert Hannaford to paint her portrait – which is the fifth portrait by him for St Mark’s. (The others are of former Masters Malcolm McKenzie and John Bannon, former Chair Gavin Walkley, and long-time resident academic Professor Don Nicholas.) Describing the portrait as “magnificent”, Ms Alwyn said she was “very grateful to have this portrait, which I think is an excellent representation of me”.

Ms Alwyn also spoke of the importance – in a world that now expects equity, diversity, and inclusion – of “recognising the leadership and contribution of women of St Mark’s…, with the Board identifying some women of significance and recognising the hanging of such portraits as important symbols and artefacts”.

In warmly welcoming guests to the unveiling of the portrait of his “predecessor and friend, the eighth Master, Rose Alwyn”, the Head of College, Professor Markwell, said:

“On 3 February 1984, Rosemary Alwyn wrote from Canberra, where she had been a student for 12 years at Canberra Girls’ Grammar School, to the Master of St Mark’s College, Adelaide:

Thank you so much for your kindness in sending me the application forms to St Mark’s College. I feel I could make a fair contribution in all aspects and activities in College life.’

37 years later, after an outstanding contribution to this College’s life, as you know, Rose Alwyn is to join the Reverend Peter Thomson and all other Masters of the College with her magnificent portrait by Robert Hannaford hanging with theirs above the High Table.

And the kindness which the young Rose attributed to Reverend Thomson has been the hallmark of her own contributions throughout – in which I include her own great kindness to me personally.

Following in her father’s footsteps in coming to St Mark’s, Rose was a resident student here from 1984 – the third year of women students at St Mark’s – to 1986, while she studied for a Bachelor of Arts, first at Flinders and then at the University of Adelaide, including winning the Lia Watson Prize for third-year Social Sciences. Rose served as Secretary of the College Club in 1986, and through her undergraduate years represented the University of Adelaide in tennis, and St Mark’s in hockey, swimming, netball, athletics, tennis, and debating.

After graduating, Rose served from 1989 to 1994 as the first female Secretary of the Old Collegians’ Association, and then in 1994-95 as its first female President. By then, Rose was already a member of the College Council and of the College Foundation.

All this reflected the passionate enthusiasm for and unwavering commitment to St Mark’s which have marked all Rose’s countless contributions – her ‘countless gifts of love’ for St Mark’s and its students – including as Dean from 2003 to 2007, and then as Master from 2008 to 2019.

Rose came to the position of Dean in 2003, under Master John Bannon, from the Service to Youth Council, where she had worked since 1995, including from 1998 onwards as General Manager of the Youth Services Division. This involved extensive experience in youth and community services focused on homeless and ‘at risk’ young people, and built on Rose’s earlier years of experience in training and employment services for the unemployed.

During busy years both as Dean and with her and husband David’s family of five children, Rose – ever organised – in 2006 also successfully completed a Masters of Business Administration at the University of Adelaide, including winning the Baron Partners Prize for Strategic Management – with the highest mark for Strategic Management out of over 200 students in that year.

In 2007, as John Bannon was preparing to retire, the selection committee to find his successor received applications from ‘a strong field of candidates including local, interstate and overseas applicants’. In announcing Rose’s appointment from this strong field, the Chairman of Council, Richard Burchnall, said what everyone knew to be true: ‘Ms Alwyn has been an outstanding Dean and is held in very high regard by the College community.’

Over the subsequent almost-12 years as Master, Rose gave of herself with tireless devotion to St Mark’s and its students. When, in August 2019, some 180 Collegians and friends of the College gathered to farewell her as she left to take up the Wardenship of St John’s College at the University of Queensland, the warm tributes paid reflected her contributions in so many ways:

From 2016 to 2018, Rose had served as President of University Colleges Australia, the group that represents residential university colleges around the country. At her farewell from St Mark’s in 2019, Dr Ian Walker from ANU, representing University Colleges Australia, spoke of Rose’s ‘energy and leadership’ and her – quote – ‘encouragement and support of all our Colleges and Halls … to be the best possible places of scholarship and safety, of community and care, of respect and renewal, of collegiality and (where needed) change.’ ‘No one’, he said, ‘has been or is more committed to this task.’

Robert Hannaford has painted what I think is a brilliant portrait of Rose.  To both subject and artist go many thanks and warmest congratulations.

As I mentioned earlier, Rose’s portrait will tomorrow be hung next to another striking Hannaford portrait – that of Rose’s predecessor as Master, John Bannon. These are two of five Hannafords in this Hall, in our small but significant collection of portraits that also includes, amongst others, two by Sir William Dargie and two by Sir Ivor Hele.”

In her speech of thanks after the unveiling of the portrait, Rose Alwyn pointed out that it was the veteran South Australian portraitist Sir Ivor Hele (whose portraits of  Sir Archibald Grenfell Price and Sir Henry Newland are in the Hall) who encouraged Robert Hannaford to take up painting full time in 1970, which she described as “a really lovely connection”. 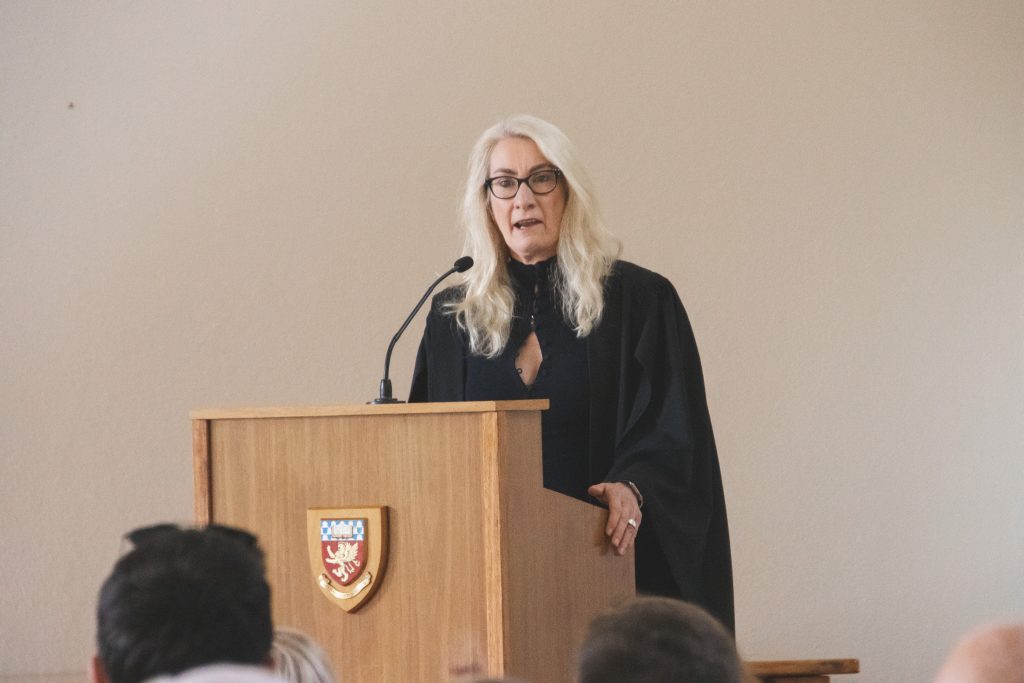 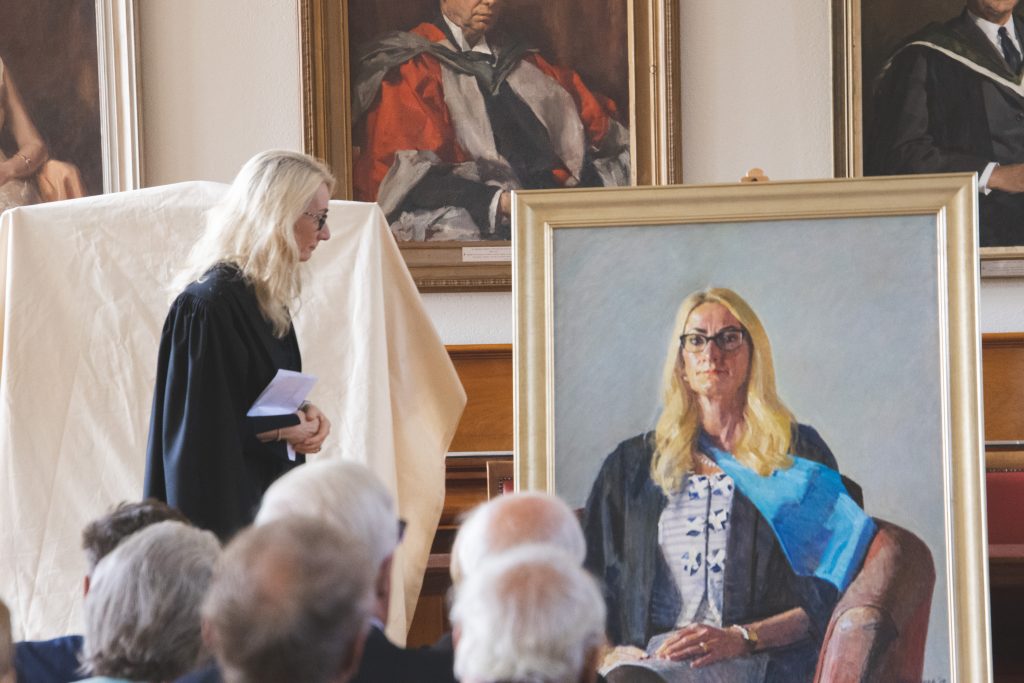 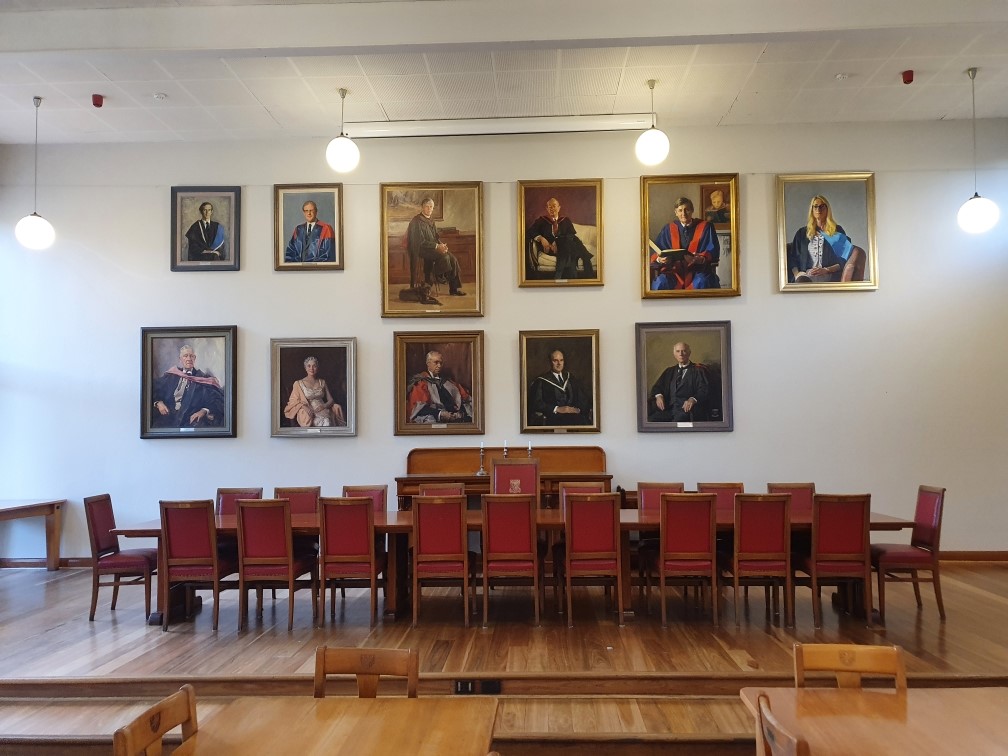