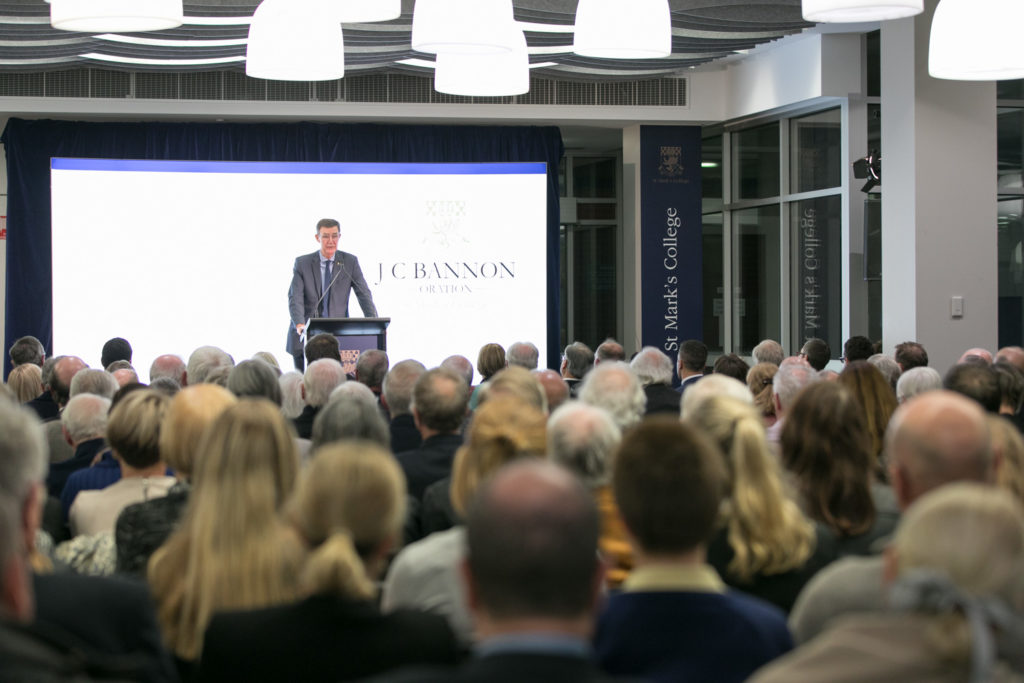 “It is curious – curious that physical courage should be so common in the world, and moral courage so rare” – Mark Twain

The J C Bannon Oration is an annual lecture hosted by St Mark’s College in memory of the College’s seventh Master, the Honourable Dr John Charles Bannon AO. John was as a student at St Mark’s College from 1962-63, before going on to become Premier of South Australia from 1982-1992, before returning as the Master of St Mark’s College from 2000-2007. A passionate politician, scholar, sportsman and patron of the arts, John had a lasting impact on South Australia. He was ardent about the importance and perpetuity of education and continued learning and inspired this passion in others until his passing in 2015. An annual lecture where great thinkers and innovators share their knowledge, insights and stories to inspire others to achieve greatness of their own is a fitting tribute to his memory.

The evening began with an Acknowledgement of Country from distinguished Aboriginal scholar and Wiradjuri woman Dr Jessa Rogers, before the Chair, Linda Matthews, introduced the evening’s Orator, Sir Angus Houston.

Sir Angus Houston is a distinguished Australian. He was awarded the Knight of the Order of Australia in January 2015 for extraordinary and pre-eminent achievement and merit in service to Australia, through distinguished service in the Australian Defence Force, continued commitment to serve the nation in leadership roles, particularly the national responses to the MH370 and MH17 disasters, and in a variety of roles in the community. He is the current Chancellor of the University of the Sunshine Coast, and is a Chair, Board member or patron of numerous community organisations.

Drawing on over four decades of military experience and a wide range of community leadership roles, Sir Angus shared his Five Principles for excellent leadership, arguing that leadership is “a soft skill demanding moral courage and integrity.” Reflecting on his years in the Air Force, he spoke of the importance of establishing and maintaining a “‘values-based, people first’ supportive culture”, the challenges of doing so, and how his own personal mantras “People First” and “People before Platforms” led him to respond to situational and organisational challenges. Stories included managing the transfer of battlefield helicopters from the Air Force to the Army, safety reform in aircraft fuel tank maintenance, and developing a flying safety culture that has seen no airmen or airwomen lost in Air Force accidents for 20 years.

Sir Angus advocates backing your people and fostering “leadership at all levels”. He believes this is the key to success and cultural reform. In advice every organisation can benefit from, he argues that “strong and consistent leadership at all levels and all parts of the organisation will not only ensure the achievement of the right outcomes but will also enhance morale and avoid failures of leadership”. This approach requires time and effort, and developing trust in the people you work with. It also requires a full commitment to Sir Angus’s fourth and fifth principles: communication and relationships. Knowing when to listen and when to speak is a crucial leadership skill. He also urges us not to underestimate the value of face-to-face communication, and to nurture healthy connections to others. As Sir Angus put it, “in my experience, good outcomes never come from adversarial relationships”.

In concluding his address, Sir Angus took a moment to reflect on John Bannon and his particular style of leadership. In his words:

To conclude the proceedings Master of St Mark’s College, Ms Rose Alwyn, thanked Sir Angus for his inspiring address. In reflecting on Sir Angus’ words, Master Alwyn quoted Mark Twain and posited that “indeed, moral courage is the engine of integrity – it is our inner voice that inspires us to meet our responsibilities and live up to our principles when doing so may cost us dearly.” To express the College’s gratitude, she then invited the President of the College Club, Ms Evie de Jager, to present Sir Angus with a copy of John Bannon’s 2009 book, Supreme Federalist: The political life of Sir John Downer.

St Mark’s College would like to acknowledge the seed funding gifted by the Bannon family, which helped bring the Oration series to life.