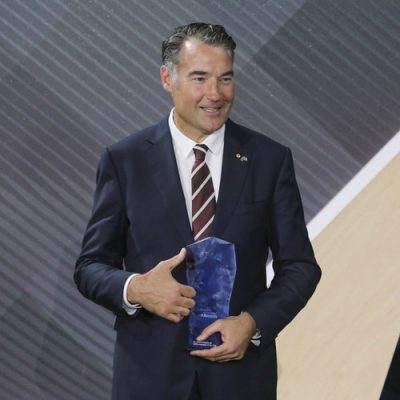 The St Mark’s College community warmly congratulates Dr James Muecke AM, who was a resident student at St Mark’s from 1982 to 1987, on becoming Australian of the Year for 2020.

The award, in recognition of James Muecke’s pioneering work in blindness prevention, was announced by the Prime Minister in a ceremony at the National Arboretum in Canberra on the Australia Day weekend.

The official announcement of James’s award as Australian of the Year says:

“Since starting his medical career in Kenya, 56-year-old Dr James Muecke AM has been passionate about fighting blindness. His focus now is the leading cause of blindness in adults – type 2 diabetes – a spiralling epidemic that’s impacting nearly one-in-ten Australians. It’s the fastest growing cause of vision loss in Aboriginal people and the sixth-biggest killer in this country. James wants to challenge our perception of sugar and the impact it has in the development of type 2 diabetes.

“Previously, James co-founded Vision Myanmar at the South Australian Institute of Ophthalmology in 2000. The $1 million program has developed and operated eye health and blindness initiatives in Myanmar. Inspired by this program’s success, James also co-founded Sight For All, a social impact organisation aiming to create a world where everyone can see. With 80% of world blindness avoidable – and almost 90% in poor countries – James treats blindness as a human rights issue.”

James Muecke came to St Mark’s from Canberra Grammar School in 1982 to study medicine at the University of Adelaide. His academic record throughout his time in College was outstanding – coming top of his University year in many of his subjects, and winning several University prizes as well as College scholarships.

James was also an outstanding sportsman at College, as he had been at school. During his time at St Mark’s, he participated in swimming, soccer, football, basketball, athletics, tennis, and volley ball. For example, in 1985, he helped St Mark’s to victories in basketball, swimming, and athletics.

James was also awarded colours for athletics more than once, served as secretary for individual sports in a number of years, and in 1986 served as Sports Secretary for the College Club.

In more recent years, James’s links with the College – including enduring friendships with fellow Old Collegians – have included the hosting of events for Sight for All at St Mark’s. The College newsletter in 2011 recorded that, as James “recalled his College days and the memories he had of Garden Parties on the front lawns of Walkley Cottage, he was inspired to hold the charity event ‘Sculpture for Sight’ at the College.  … The College looked amazing, and the 400 guests in attendance enjoyed the music and hospitality as they helped raise $50,000 for the establishment of a number of eye centres in Laos to help thousands of people suffering avoidable blindness.”

Dr Angela Evans – a friend of James Muecke’s since their first year in College in 1982 – summed up the feeling of so many members of the St Mark’s community on hearing of his being named Australian of the Year: “So well deserved. James is a very worthy recipient of this great award.”